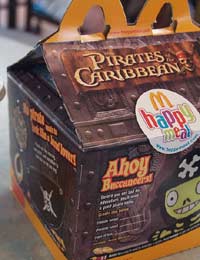 Pester power used to be the bane of many a parents shopping trip, with any visit to a supermarket punctuated by appeals from the little ones for this box of cereal or that chocolate treat. Over the last decade or so, however, the ubiquitous free toy with the cereal seems to have disappeared, having gone the way of silver top milk on the doorstep and Spangles.

Health and Safety in Cereal Boxes

Finding and collecting figurines and more from the bottom of our box of Shreddies or Sugar Puffs used to be one of the pleasures of growing up, but these days the competitions and offers that punctuate our breakfast experience are more likely to be vouchers for gym memberships, school promotions or another product, so the undiluted joy of finding a piece of cheap plastic at the bottom of that bag, and fighting over the Star wars figurine to complete your collection with your brother is just a distant parental memory.

The main reason for the disappearance of these little treats isn’t a ban, as many people think, although there is a health and safety element to it. Toy safety rules are already strict, but they are due to get stricter in July 2011, when the European directive on toy safety is introduced. The Directive is likely to stop any toys being sold with cereal boxes or in crisp packets due to the amount of testing that they will have to be subjected to in order to pass the safety requirements.

Anything that could be construed as a toy will have to go through a rigorous safety assessment - and not only that, it will have to be properly documented. Hardly worth it for a plastic toy in the bottom of a box, really. Certainly not economically viable for a cereal manufacturer, who would probably have to outsource these tests to an independent laboratory.

The Fate of the Happy Meal

The other well-known sources of free toys with dinner were fast food manufacturers such as McDonald’s who would always latch on to the latest Disney film or over-hyped action blockbuster and come up with variations on a theme to go with every kids meal.The Happy Meal toy has come under fire in recent years for being the sole reason for the child obesity epidemic, which is probably more than a little unfair. But that hasn’t stopped an American mother from teaming up with a consumer health organisation, who announced that they were suing the fast food giants and trying to force them to stop selling the toys with their food.

The American Centre for Science has teamed up with a mother-of-two called Monet Parham, who sued McDonald’s back in December 2010 on the grounds that it was violating US consumer protection laws.

The team are claiming that Happy Meals encourage vulnerable children to go into places such as Burger King or McDonalds because they want the toys and special offers - and this means they eat the food, become obese and end up addicted to junk food.McDonalds seem unperturbed by this latest attack, saying that they believe parents know a Happy meal is a fun treat for their kids that can fit into a balanced diet.

The chain pointed out that it’s not just burgers on the menu in their restaurants, saying that children could also opt for carrots, fruit or juice in their Happy Meal.

One US state has already taken action to ban Happy Meals, in its fight against obesity. Some parts of California took the step to ban the treats in 2009 and it’s not just the McDonald’s chain that’s been targeted, in Santa Clara County, where all fast food meals and snacks which come with toys are how banned.

So it definitely seems that the days of the free toys with your meals are numbered.