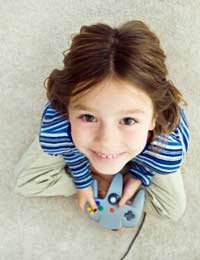 Buying computer games and video games for children is a minefield – currently there are two classification systems in place, one of them is only a voluntary scheme and the other only applies to games which have certain adult themes.

A consultation on the subject was announced in July 2008, and a simplification of the system is on the cards, but for now it can be hard to tell if the game your offspring is clutching in his hand is suitable for him.

The new, legally enforceable system of age classification which is hopefully on its way will help parents to decide whether video games are suitable for their children.

Under the Video Recordings Act 1984, a computer or video game loses the exemption if it features scenes that depict:

Video games which feature any of these are obviously not going to be appropriate for children, and have to be legally classified before they can be sold or rented in the UK. However, to make things more complicated, at the moment some companies submit their games for classification by the BBFC even though they don’t have to, so you could still have a video game for children with an appropriate age rating – but classified in the same way as a game with more adult themes.

What do The BBFC Ratings Mean?

Ratings for children’s video games and computer games are there for parental guidance and to give parental advice on whether the game is generally suitable for a particular age group.

This ratings system was developed to help parents decide whether video games for children would be suitable – based on an age rating and a list of subjects that are covered in the game. These subjects, which are part of the parental advice, are:

Bear in mind that this scheme is purely voluntary and producers rate their own games. Hopefully the new system that’s under consultation will simplify things for parents when it comes to buying appropriate video and computer games for children.

Of course, children love to push the boundaries so be prepared for arguments about “all my friends are playing it at home” if you put your foot down about an inappropriate game.

How Much Time Should Kids Spend on Computer Games?
Share Your Story, Join the Discussion or Seek Advice..
The ratings give general guidelines and can be useful in that regard. But I found advice from other parents to be even better, as they have firsthand knowledge of kids and how they react to things. It's also quite possible that your kids might have seen a DVD or played a video game over at another house. As long as the mum recommends it, then it should be fine for your children. By the time they're teens, the ratings end up meaning little, anyway, with so much available online.
Mary - 23-Jun-12 @ 6:27 AM
Title:
(never shown)
Firstname:
(never shown)
Surname:
(never shown)
Email:
(never shown)
Nickname:
(shown)
Comment:
Validate: