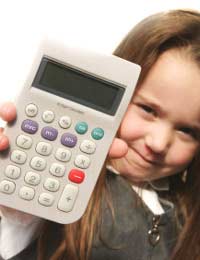 Maths is one of those subjects that children tend to either love or hate as they are growing up, and for those who hate maths or find it difficult, sometimes a little encouragement by way of a gadget or electronic game can be the thing that stimulates their interest and stops them giving up on the subject.

There are plenty of different options if you’re looking for the ideal way to introduce a younger child to the toys of maths. One gadget that might take their fancy is the ‘Maths Whiz’ from Learning Resources, which is suitable for children over the age of six, and teaches the basics of addition, subtraction, multiplication and division on a cute interactive pad.

There are different levels for different abilities and the toy is designed to combat boredom with plenty of settings to choose from.

Or there’s the ‘Maths Shark’ gadget which is a similar console, for children to use to practice their maths skills on. It’s a portable games style console that gives you quizzes on different areas of maths including fractions, decimals and percentages. It can also be used as a calculator.

An interest in maths is bound to follow with an interest in computers, so encourage a potential technical expert by letting your child learn and practice maths on computer games – whether they are proper ‘grown up’ computers or their own games consoles.

A study back in 2002 indicated that as well as strategic thinking and problem solving skills, computer games could help improve maths and English skills, so it’s OK to let your kids play computer games that aren’t specifically learning oriented.

If you’re looking for games that are, though, you could look into the Nintendo DS range of brain training games. A 2007 study showed that playing a particular brain training game could have been responsible for helping to increased children’s maths skills dramatically! 30 children aged between nine and ten played the “Dr Kawashima's More Brain Training” game for about 15 minutes every day before lessons. The games involve number challenges, problem-solving exercises and memory puzzles. Another school used a similar ‘Brain Gym’ game for the same amount of time, and a control group did neither.

The skills of the group who used the Brain Training game improved more over ten weeks, than either of the other two groups. As a bonus, the behaviour of the group improved with pupils appearing to be more calm and focused. Although the study was small scale, it does look promising!

Learning on the PC

If you have a PC at home you can make maths fun, with the wide range of maths based PC games that suit children of all ages.

The ‘I love’ range of CD Rom computer games is based on the national curriculum and the maths version involves fun characters who try to bring everyday situations involving maths to life. The game aims to boost the child’s understanding of concepts like fractions, geometry and measurements, and help them develop the skills needed to use maths in the ‘real world.’

For older children and teens there are computer based maths tutorials which can be used for GCSE and A level learning, and help to reinforce the lessons they are having at school.